The Cellular Telephone Industry Association (the CTIA) sued the City and County of San Francisco on July 23, 2010 in an attempt to overturn the City’s new ordinance requiring disclosure of the “Specific Absorption Rate” (SAR) data.  The Ordinance is titled the “Cell Phone Right-to-Know Ordinance” (Ordinance No. 155-10).

So what is a SAR, anyway?

As the FCC says,

Working closely with federal health and safety agencies, such as the Food and Drug Administration (FDA), the FCC has adopted limits for safe exposure to radiofrequency (RF) energy. These limits are given in terms of a unit referred to as the Specific Absorption Rate (SAR), which is a measure of the amount of radio frequency energy absorbed by the body when using a mobile phone. The FCC requires cell phone manufacturers to ensure that their phones comply with these objective limits for safe exposure. Any cell phone at or below these SAR levels (that is, any phone legally sold in the U.S.) is a “safe” phone, as measured by these standards. The FCC limit for public exposure from cellular telephones is an SAR level of 1.6 watts per kilogram (1.6 W/kg).

Every cell phone sold in the U.S. must comply with the FCC regulations requiring compliance with the SAR rule, and public disclosure of the SAR value via the FCC’s web site, and sometimes at other web sites.

It’s the ‘public disclosure’ part is just what the CTIA (and the wireless industry that funds it) is so afraid of.

So what, exactly, has San Francisco done to tick-off the CTIA?

San Francisco adopted an ordinance requiring easily accessible point-of-sale disclosure of the SAR value for each phone sold or leased in San Francisco by retailers.

So, what does the ordinance require?

First, it requires that any cell phone service provider (think: Verizon, AT&T, MetroPCS, etc.) provide the City with a list of their retailers located in the City.  That list must be updated annually.  (Ord. Sect. 1102.)

To promote uniformity, the City will adopt regulations specifying the content and format of the three elements just listed.

Third, the ordinance sets the minimum physical size, and the type face and minimum point equivalencies for the notice.  (Ord. Sect. 11043.)

That’s what the wireless industry finds to be simply egregious, but they frame their argument in terms of, well, PR spin.  Just read the  first line of that portion of the CTIA’s press release about it’s law suit. The quote, attributed to John Walls, their VP of Public Affairs is:

“CTIA has filed this lawsuit to prevent consumer confusion. The problem with the San Francisco ordinance is not the disclosure of wireless phone SAR values – that information is already publicly available. Consumers can learn a device’s SAR value from a number of public sources, and the value is often included in user manuals and listed on the websites of manufacturers and the FCC. CTIA’s objection to the ordinance is that displaying a phone’s SAR value at the point-of-sale suggests to the consumer that there is a meaningful safety distinction between FCC-compliant devices with different SAR levels.

“The FCC has determined that all wireless phones legally sold in the United States are ‘safe.’ The FCC monitors scientific research on a regular basis, and its standard for RF exposure is based on recommended guidelines adopted by U.S. and international standard-setting bodies. Furthermore, according to the experts at the U.S. Food and Drug Administration (FDA), the available scientific evidence shows no known health risk due to the RF energy emitted by cell phones. As the FDA states on its website, ‘[t]he weight of scientific evidence has not linked cell phones with any health problems.’

“In contrast, the message conveyed by the San Francisco ordinance to consumers is that the FCC’s standards are insufficient and that the safety of an FCC-authorized wireless device depends on its SAR level. Therefore, the ordinance contradicts the thorough review of the science by the FCC, FDA and other U.S. and international expert agencies, and will send consumers the false message that there is a safety difference between wireless devices that comply with the FCC’s stringent standards.

“The wireless industry is committed to consumer choice. That means providing consumers with the best information to assist them in making the right choice for them when purchasing a device and services.  The San Francisco ordinance, by conveying a misleading impression about the relative safety of wireless phones, will hinder – rather than assist – consumers in making their choices.”

I love the in-your-face PR spin that the “CTIA has filed this lawsuit to prevent consumer confusion.” It’s classic misdirection. Consumer’s are confused because, ah, the same metric is presented in the same way across different handsets? And that metric is available at the very moment the consumer is considering what, exactly, to purchase? Yup, that would confuse me, too. 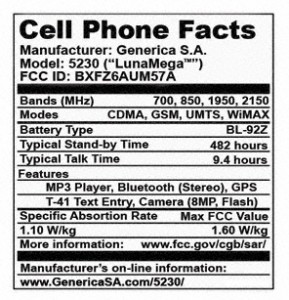 I’d like to offer my own idea for a label, and one that is instantly recognizable to anyone who happens to ingest food on a fairly regular basis.  A label, like I show below, could provide basic information to consumers at the time and point of sale, just when and where the CTIA would rather you not have that information. There could be room for other optional data about phone-specific features as I’ve suggested.

We learned to first live with, and then to realize the immense value of consumer information at the point-of-sale for all sorts of consumer food goods, and later at fast-food restaurants.   Consumer’s have not stopped buying groceries, nor have they stopped dining at Micky-D’s, but if they want the consumer information about what they’re going to eat, its right there for them when they are making their buying decisions.

Does any rational person believe that consumers will stop buying cell phones in San Francisco if the ordinance goes into force?

Finally, I believe that consumer rights’ groups should be banding together to oppose to the CTIA’s lawsuit as it is an attempt to bar a government from requiring consumer-oriented disclosure of public record information. The chilling effects that would result could deal a real knock-out blow to smart, informed consumerism.

To read the law suit and the City’s ordinance at the heart of the suit, click on this link.

For more information on SAR from the FCC, start at these sites:

She steps in for Mr. Tripp May who is now on a three-year leave of absence to attend the University of San Diego Law School, and then to take the California Bar examination.

Ms. Tomassian graduated from the University of California at Berkeley in 2010 with a bachelors of science degree. She intends to attend law school starting in the fall of 2011.

Aleen’s formal science education background has already provided to be very valuable in reaching solutions to client issues based on application of scientific analysis and systems solutions.

We’re very glad that she’s now a member of our team! 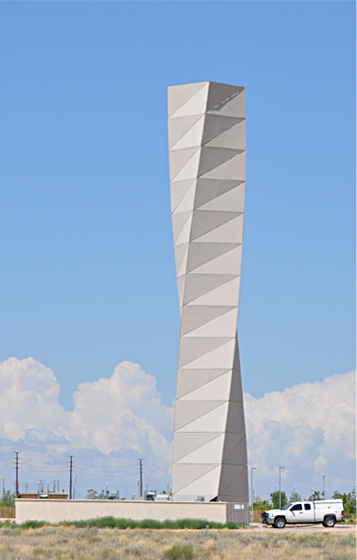 The architect for this site is Dekker/Perich/Sabatini.

This site isn’t quite complete, but it should raise the level of the discussion regarding turning cell sites into artistic visions.

The anchor tenant at the site is Verizon Wireless.  The site can handle up to seven carriers.

I have placed over 100 photos of this site in a dedicated gallery at celltowersites.com/gallery/