ave to divest portions of its existing wireless network to secure federal permissions to acquire T-Mobile.  Stephenson’s comments were made in New York at a Council on Foreign Relations event held on March 30, 2011

My suspicion is that T-Mobile will be similarly required to divest portions of its existing wireless network in the same or adjoining areas as those assets that AT&T will shed to make the deal work for the Feds.

The shed assets will help strengthen the remaining, small competitors, who will then become known as current take-over targets for other major players.

Stephenson also said at the same event that he expected consumer prices for wireless services to continue drop as a result of the proposed merger.  His comments came just hours before April Fools Day.

It’s no surprise that T-Mobile will soon cease to exist in the U.S.  What is a surprise is that AT&T is claiming the prize, rather than the widely-rumored suitor, Sprint/Nextel.

What is more of a surprise is that T-Mobile lasted so long before giving up the ship. T-Mobile has always played a game of the catch-up wanna-be to the legacy national carriers in the U.S.

What does make sense is that AT&T, rather than Sprint/Nextel looks like the winner: Sprint/Nextel certainly needs access to more sites and licenses, but AT&T can make better use of T-Mobile’s assets, specifically the AWS-Band frequency assignments around 2100 MHz.

AT&T went the other direction when it focused, rightly, on gaining new 700 MHz frequencies for its LTE data (and later, voice) deployments.  By taking T-Mobile, AT&T gains more spectrum in the 1900 and 2100 MHz bands to add to its existing 700 and 860 MHz assignments.  Sweet.  AT&T’s recent purchase of the national 700 MHz band license from the ill-conceived and now all-but-defunct MediaFLO/FLO-TV operation of Qualcomm makes even more sense given the pending marriage with T-Mobile.  Sweeter.

Sprint could not have benefited to the same degree as AT&T given that it does not have 860 MHz band assignments (yes, I’m discounting the Nextel assignments for this discussion since those have turned out to be such a poor deal for Sprint).

IF THIS DEAL GOES THROUGH, and there’s certainly a big IF in there, I suspect that the even-newer AT&T will be forced by the DOJ/FTC/FCC to sell off chunks of the existing networks of both firms.  This has been the trend in prior mergers/buy-outs, and it’s unlikely that this deal will not see sales of major network assets in the name of competition.

For site landlords, in about a year it will be time to take out their AT&T and T-Mobile lease contracts and look at those transfer terms.  It’ll be a really interesting time for site lessors with both AT&T and T-Mobile currently collocating at the same site.

For other wireless carriers, this deal will force some shotgun marriages.

I predict that Sprint/Nextel will now look to MetroPCS.  Verizon will look at MetroPCS, too.  This may also be the start of the end-game for Cricket Wireless.

Finally, many of the roaming contracts between the biggies and the smaller regional PCS and cellular carriers contain buy-out options (the biggie can for the sale of the small fish).  We’ll see Verizon continue its aggressive campaign of Roam-to-Buy as a first step of blunting the AT&T/T-Mobile deal.

For now I think we should start calling the new network: “AT&T&T”!

band, a consortium of GPS manufacturers and industry users have formed the “Coalition to Save Our GPS” (on the web at SaveOurGPS.org).

This site has various news clipping and documents related to the anticipated interference to GPS from LightSquared’s planned operations.

Presently, the consortium members include:

This is a very public ‘front’ for this fight.  Can print ads and radio spots be far behind?  I think not!

LightSquared has a report due to the FCC tomorrow (March 15). That was a particularly bad day for Julius Caesar; how will it turn out for LightSquared?

Verizon Wireless Customers Can Text to Japan for Free

NEW YORK – March 14, 2011 – To help its customers contact loved ones in the aftermath of Japan’s devastating earthquake and tsunami, Verizon is enabling most wireless and residential customers to make free calls to Japan through April 10.

Verizon Wireless has also made it easy for customers to text donations to a host of nonprofit organizations responding to the earthquake and subsequent tsunami.  Customers can easily make a $10 donation by simply sending a text message and may choose from nine organizations aiding those in need in Japan.

All calls made from a Verizon residential landline to Japan will be rated at $0.00 per minute, from March 11 through April 10.  Customers with Verizon World Plan (300, 500 or unlimited minutes of long-distance calling) can call Japan without using any minutes from their time-allotment blocks.

Additionally, Verizon Prepaid Phone Card charges for all long-distance calls placed to Japan from the U.S will also be waived from March 11 until April 10.

The company is also providing FiOS TV customers who are not subscribed to TV Japan with free access to the channel, through March 17.  The channel location is 1770.

* Only long-distance usage charges associated with calls made from residential landlines terminating to wireline or wireless destinations in Japan will be waived from Mar. 11 – April 10.  All other fees including taxes, surcharges, monthly recurring charges (MRCs), minimum spend levels (MSLs), monthly minimum charges (MMCs), etc will continue to apply.  Post-paid calling card charges to Japan will also be waived.

** If long distance calling fees were charged, credits will be issued in a future bill statement.

Findlaw is reporting that AT&T Wireless is offering some of its customers a free in-home microcell (sometimes called a femtocell) … for customer who repeatedly complain about dropped calls.

According to Findlaw, “If you have complained to AT&T about your coverage or have used their application to report dropped calls, you are likely to be contacted by AT&T regarding this offer. It’s something to consider if you haven’t already decided to switch to Verizon. Customers report already beginning to receive letters with offer codes in the mail. If you have difficulty with service at your home or office but haven’t received an offer in the mail, it’s probably wise to call AT&T and give them a little nudge.” 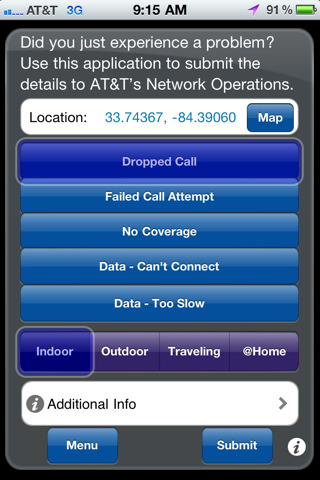 The AT&T “Mark the Spot” app, available at the iTunes Store, is your ticket to reporting AT&T service problems.  It’s also the apparent way to get AT&T’s attention that you should get one of their free femtocell.

This is an interesting tool for many reasons, not the least of which is that some smart municipal attorneys might very well look to ‘discover’ this data when AT&T files a law suit in light of a government’s siting permit denial.

Anyway, I do think that this is an interesting way to try to maintain customers who might be thinking about jumping to Verizon’s iPhone service (even with its data speed and multitasking limitations, but that’s a different posting).

For AT&T’s information on its in-house microcell/femtocell, CLICK HERE.

At the direction of the FCC on January26, 2011 (See: http://tinyurl.com/lightsquared-fcc-file for all of the filings), LightSquared and the GPS Industry Council have formed a working group. The working group will conduct tests of LightSquared’s transmission system to determine whether LightSquared’s proposed filter solution will resolve the demonstrated potential for interference to GPS users within miles of each proposed LightSquared site.

The potential for LightSquared service to cause severe interference to GPS users was made clear in an ex parte teleconference presentation made on January 19, 2011 to the FCC by members of the GPS Industry Council.

Simply put, the GPS Industry Council’s testing discloses that LightSquared’s very high output power from its planned 40,000 sites, coupled with its proximity in frequency to the very weak GPS downlink band, forms a witch’s brew for catastrophic interference to GPS receivers. LightSquared’s system is to operate in the 1525-1559 MHz band, while the GPS downlink frequencies are in the 1559-1610 MHz band. You can read the ex parte notice and the presentation by clicking here.

LightSquared has stated that it take care of the potential interference to GPS users using filters. It’s unclear whether the filters are sufficient, or who would be expected to pay for the cost of the filters.

On February 25, 2011, Light squared submitted its first report to the Commission regarding its work with the GPS Industry Council. That report is linked here. The group’s next report is due on the Ides of March. The final report showing the results of the filter testing is due to the FCC on June 15, 2011.

To frame the uses and users who could be negatively affected by GPS interference, or the outright loss of GPS coverage, here’s an abbreviated list of users and uses:

Yeah, this is a big deal