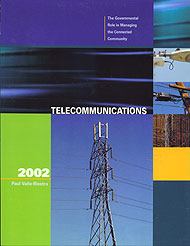 “Telecommunications: The Governmental Role in Managing the Connected Community”

I’m very pleased to share with you that Christina Sansone, Esq. and I have been signed by Solano Press to update, revise, and substantially expand Paul Valle-Riestra’s book, “Telecommunications: The Governmental Role in Managing the Connected Community.”

First published in 2002, Paul’s book remains a standard desk reference for planners and attorneys in the U.S. for all phases of governmental involvement in telecom law and policy.

Here is a link to the front/back covers of Paul’s book: http://solano.com/pdf/TE_FrontAndBack_01.pdf

Paul was also one of the national deans of municipal telecom law lawyers, never shying away from a juicy telecom law or policy battle. A true giant among municipal attorneys, Paul rose through the ranks ultimately serving as the City Attorney of the City of Walnut Creek, California (where he was born and raised) until his untimely death in 2011 at the far-too-young age of 52.

Paul was also one of the national deans of municipal telecom law lawyers, never shying away from a juicy telecom law or policy battle. Material portions of 9th Circuit judge-made law can be traced to Paul’s cases, and the influence he exerted in cases argued by others.

I had the very real privilege of being a principal reviewer and contributor to Paul’s book, so you’ll understand why I am so proud to be following in his footsteps.

I especially thank his widow, Alice (known to some as “Honey Sponge Cake”) for making it possible for a new edition to come about.

Paul was my friend, mentor, teacher, and critic. I could not have asked for more from him.

I know that Chris and I will do him and his memory real honor as we take on our task to continue his work.

The FCC’s State and Local Government webinar today touched on the pending Wireless NPRM.  I recorded the audio of the lecture and have provided it via the live link below.  The running time is about 19 minutes and 11 seconds.

I am very pleased to announce that I received word today that I have been officially accepted into the Northeastern University School of Professional Studies Doctor of Law and Policy program.   I will commence my cohort studies in July, 2014.  I’ll be traveling to Boston every month for two years to complete in-class coursework, which will be supplemented by studying between the in-class sessions.

Having completed my Masters of Law degree in Information Technology and Telecommunications Law at Strathclyde University just last year, this next step will be my final and terminal academic degree.

I want to thank three people in particular for supporting me in my next life endeavor: Fred Polner, Associate Master of Trumbull College at Yale University; Ken Fellman of Kissinger & Fellman in Denver; and Dr. Konstantinos Komaitis of the Internet Society and Strathclyde University, all of whom were kind enough to write strong letters of recommendation on my behalf.

John Pestle and I will once again present an updated version of our very popular lease buy-out lecture, “Selling Your Cell Tower Lease.”  This time we’ll present on April 9th, 2014 at 1:00 p.m. EDT/10:00 a.m. PDT.   Lorman Education Services hosts many of the lectures John and I present, and they do an outstanding job at it.

Property owners with a cell tower or cell antennas on their property routinely receive six-figure offers to buy the cell tower lease and future leasing rights. While very attractive, those offers-typically structured as perpetual easements-pose unusual legal, financial, and technical risks that the property owner and its regular attorney typically are not familiar with. This live webinar will guide property owners and their attorneys as they evaluate and respond to such offers. It includes covering what drives the offers, typical prices, how to evaluate financial terms to determine whether selling makes sense (and when it doesn’t). Those who attend will be better able to evaluate purchase offers, identify and modify the very one-sided documents offered by purchasers, and address some of the risks involved in a sale. Risks include making sure the property owner is not hindered in developing or using its property, ensuring that future sums promised by the purchaser in fact are paid and the contract honored (and the sale terminated if they are not), insurance and bankruptcy protections, as well as questions as to the financial solvency of the buyer. These risks increase as the easement term increases (typically from 50 years to perpetual) given that the property owner continues to own the underlying property. Government agencies face all of the preceding issues, plus special and fundamental questions of municipal authority, compliance with municipal finance/procurement statutes, prohibitions on waste, and risks of accidentally triggering property reverters.

– You will be able to know when a sale does and does not make sense for you.

– You will be able to discuss revising documents to protect property owner and address the preceding issues.

– You will be able to recognize sales terms preventing the property owner’s future use or development of its property.

– You will be able to define the major legal risks involved in selling cell tower leases and easements.