The U.S. Court of Appeals for the Ninth Circuit has issued (and set for publication) what will inevitably become a heavily cited decision about wireless siting. This case is the logical next step in the line of MetroPCS v. San Francisco and T-Mobile v. Anacortes, albeit not as the wireless industry would have it.

From the Court’s summary (not a part of the case decision):

The panel affirmed in part and reversed in part the district court’s summary judgment on claims that the City of San Diego’s denial of continual use permit applications for telecommunications facilities violated the California Permit Streamlining Act, the federal Telecommunications Act, California Code of Civil Procedure § 1094.5, and the Equal Protection Clause.

Reversing the district court’s summary judgment in favor of the plaintiff on its claim that the City violated the time limits of the Permit Streamlining Act, the panel concluded that the permit applications were not deemed approved before the City denied them because “the public notice required by law” did not “occur.”

The panel affirmed the district court’s summary judgment in favor of the City on the other claims. The panel held that under the Telecommunications Act, the City’s decision to deny the permit applications was supported by substantial evidence, and the City did not misapply its Land Development Code. The permit denial did not constitute unreasonable discrimination among functionally equivalent service providers because the plaintiff and the City were not functionally equivalent providers. The permit denial did not constitute an effective prohibition of personal wireless services because the plaintiff did not demonstrate that its proposals were the least intrusive means of filling a significant gap in coverage.

The panel held that the plaintiff could not prevail under Cal. Civ. Proc. Code § 1094.5 because it did not have a fundamental vested right to the continued use of its facilities. The panel held that the permit denial did not violate equal protection because it was rationally related to the City’s legitimate interest in minimizing the aesthetic impact of wireless facilities and in providing public communications services.

Regarding the Telecommunications Act claims from the decision:

As to which side gets to decide “least intrusive means” the court said:

During the review process, ATC rejected relocation of the facilities or modifications that involved reduction in height or redesign of the towers. ATC essentially insisted that the City accept ATC’s conclusion that the existing facilities were the “least intrusive means,” without offering a feasibility analysis of alternative designs or sites for the City to reach its own conclusion. In effect, ATC would make the applicant—rather than the locality—the arbiter of feasibility and intrusiveness, gutting the “least intrusive means” standard with predictable, applicant-friendly results.

As we explained in MetroPCS, Inc., the “least intrusive means” standard “allows for a meaningful comparison of alternative sites . . . [and] gives providers an incentive to choose the least intrusive [means] in their first [ ] application[].” 400 F.3d at 734–35. To achieve these objectives, the applicant must make a prima facie showing of effective prohibition, which the locality may then rebut by demonstrating the existence of a potentially available and technically feasible alternative. City of Anacortes, 572 F.3d at 996–99. ATC did not adduce evidence allowing for a meaningful comparison of alternative designs or sites, and the City was not required to take ATC’s word that these were the best options. Consequently, ATC failed to show that its facilities were the least intrusive means of filling a significant gap in service coverage, and the City is entitled to judgment as a matter of law on the effective prohibition claim. Cf. id. at 989, 996–99 (finding a violation of § 332(c)(7)(B)(i)(II) where the provider made a prima facie showing of effective prohibition, including an analysis of eighteen alternative sites, and the locality failed to rebut the prima facie showing with evidence of available alternative sites).

There is a lot more to read, but you can see why this decision will become immensely important in guiding future siting cases at the state and local government level.

I expect American Tower to seek an en banc review of the decision by a larger 9th Circuit panel.   I also expect that the request will be denied.

I believe other circuit courts will cite to this reasoned decision when reviewing the same types of issues that arise elsewhere.

Having lost big-time  in the 9th Circuit, I expect the wireless industry to seek state legislation to try to effectively overturn portions of the 9th Circuit ruling.  What happens at the federal level is as yet a wildcard.

An interesting question implied from this decision and raised by a really, really smart attorney in Orange County: Will no-notice administrative permits go out the window?  I suspect that might well be the outcome! 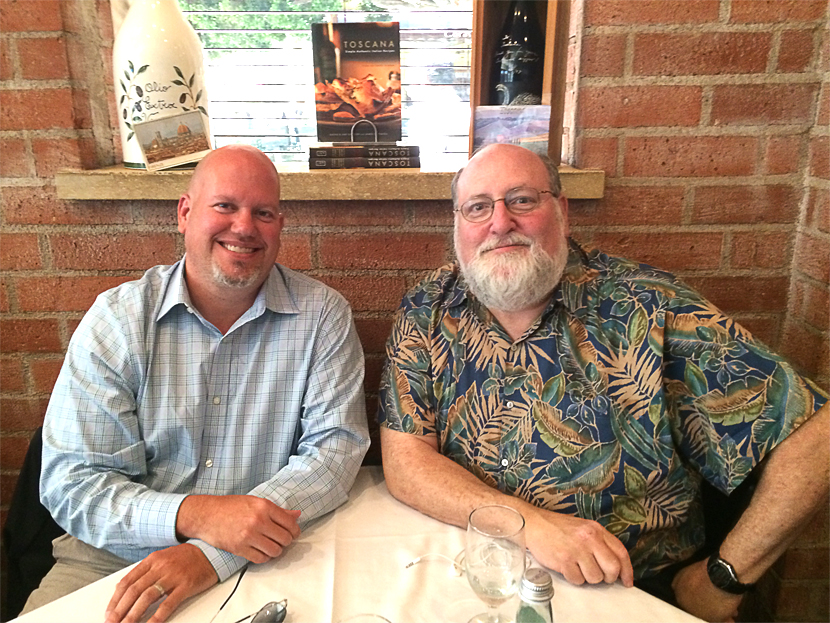 I had the pleasure of having lunch today with Ken Schmidt, President of Steel in the Air. Although we have talked many times over the years, this is the first time we have met in the flesh.

Ken is exceptionally knowledgeable in the same areas where I and my associates practice, specifically in wireless leasing and telecom matters.  We have been very friendly competitors over the years, and we enjoy talking shop about what’s happening in the leasing and regulatory worlds.

Like yours truly,  Ken serves as an expert witness in wireless matters.

I always learn valuable things from Ken.   Today, I also learned how much I enjoyed having lunch with him.

Sprint walked away from the altar conceding that U.S. regulators would not approve the marriage between the #3 and #4 wireless carriers that would leave the couple still #3.

What’s next for T-Mobile? I suspect the embittered bride will start looking for several smaller regional suitors to serially marry.

Will T-Mobile become a Bridezilla? Only time and the regulators will tell.