This afternoon, SB 649 (the “Local Governments Give Up Their Property to Enrich Wireless Companies Act”) was heard in the California Senate Governance and Finance Committee.  With amendments not seen by the public, and clearly not understood by the Committee Members, the Bill was voted unanimously approved and voted out of that Committee.

The Committee also determined that they were best positioned to determine how much the industry should pay local governments for wireless industry access to local government property, so they appointed a subcommittee to do just that.

If you’d like to listen to 85 minutes of misleading industry testimony, concerns by local government and APA representatives, more concerns from a panel that worries about RF emissions, and back-peddling from the sponsor of the bill, you can stream the audio here:

Hopefully, the as-yet unseen amendments clearly not understood by the Committee will be out soon. 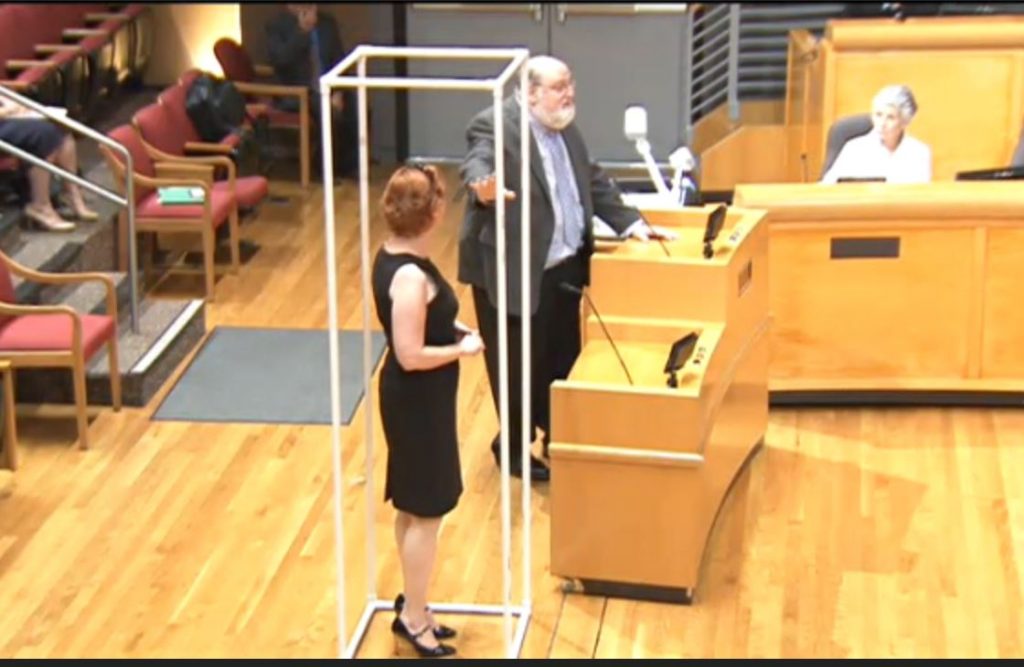 Appearance 1:  Last night Rebekah Rounds and I attended the Planning Commission hearing in the City of Thousand Oaks.  During the public comment portion of the meeting I described SB 649 to the Commissioners.  With Rebekah’s help, we demonstrated the Big Lie about Small Cells.

Here is a screen capture from the hearing:

Here’s a link to watch the video: http://www.toaks.org/departments/city-manager-s-office/public-information-office/totv/watch-videos

Select the Planning Commission hearing for April 24, 2017, and then watch the video from 7 minutes 20 seconds in to 15 minutes, 16 seconds.

Appearance 2: Today, all of the California-based members of Telecom Law Firm presented a 2-hour wireless law, regulation, and technology lecture to over two dozen key planning and legal professionals at the City of Los Angeles.  During the lecture, we deep-dived into the wireless industry’s assault on California governments and their constituents through SB 649.  Once again, the Frame came out:

It turns out that when you see what the industry thinks is small, the claim falls apart in mere seconds.

The Big Lie can’t withstand the light of day, which is why the industry talks about pizza boxes as being the size of small cells. If that’s true, then states should define small cells as occupying 1.25 cubic feet, and no more. 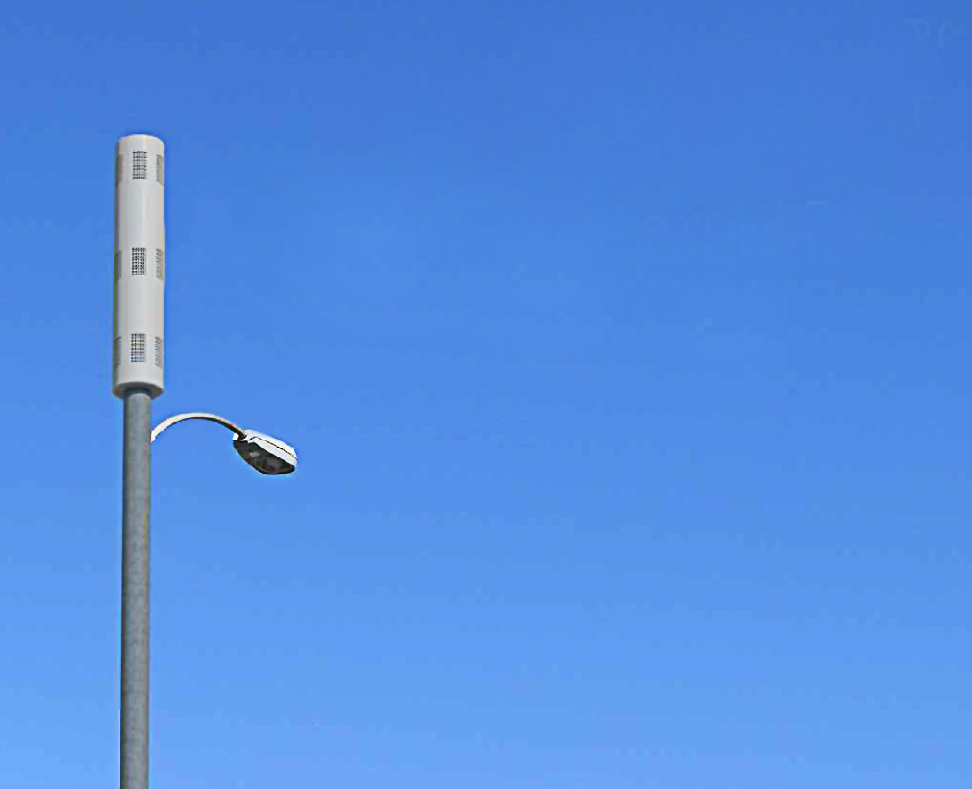 After Mobilitie’s Gary Jabara’s particularly repugnant and inexcusably-insulting remarks about local governments published in AGL Magazine last month, who would have expected his firm to finally join the rest of the wireless industry and propose enclosing site equipment within radomes atop light standards?

What’s even more shocking is that this design does away with all of the external equipment (save for a pedestal-mounted utility power meter, which might not be necessary in every case).   Below is a capture of a photo simulation from a Mobilitie project submitted to a local government in Southern California.

The 7′ tall radome on top of the replacement light standard encloses the subscriber-link antenna, the RRU, the backhaul (UE) relay equipment, and power distribution cabling.

Compare the newer, more thoughtful design above to Mobilitie’s legacy pox-on-a-pole “Walrus” configuration (my identification; not Mobilitie’s) being deployed in the City of Los Angeles:

It’s time for all local governments approached by Mobilitie to push back for reasonable camouflaged designs, at reasonable heights, rejecting their ridiculous pox-on-a-pole designs of what I call Mobilitie’s Rev 0.7.

The wireless industry’s push to bamboozle California Senate lawmakers through the ill conceived, horribly-written, and loophole ridden SB 649 requires they constantly repeat a critical big lie: That they are only dealing with “small cells” … small … can’t be large because they’re calling them ‘small.’

It’s perfect and perfectly misleading framing. Call something by a label enough time and it must be the truth.

So, what’s an inconvenient truth for the wireless industry?  That 22 cubic feet, or 28 cubic feet, or 32 cubic feet are examples of the volume of space occupied by a small cell…remember it’s small because they say so.

Let’s take their mid-size small cell, promoted to be 28 cubic feet.  What, exactly is 28 cubic feet?  We’ll to show you, rather than to lie to you, I built up a PVC frame that’s 7 feet tall and 2 feet for width and depth.  This is a size similar to commercial wireless equipment cabinets to be mounted on concrete bases.

If you’ve ever met me, you know I’m not a particularly small human, so the photo below of me standing entirely with a 28 cubic foot frame illustrates the industry’s big lie about small cells.

If you’d like to build your own 28 cubic foot frame and take it to a meeting at City Hall, the County Board of Supervisors, or a meeting with your State Senator or Assembly Member, just follow the basic steps below. 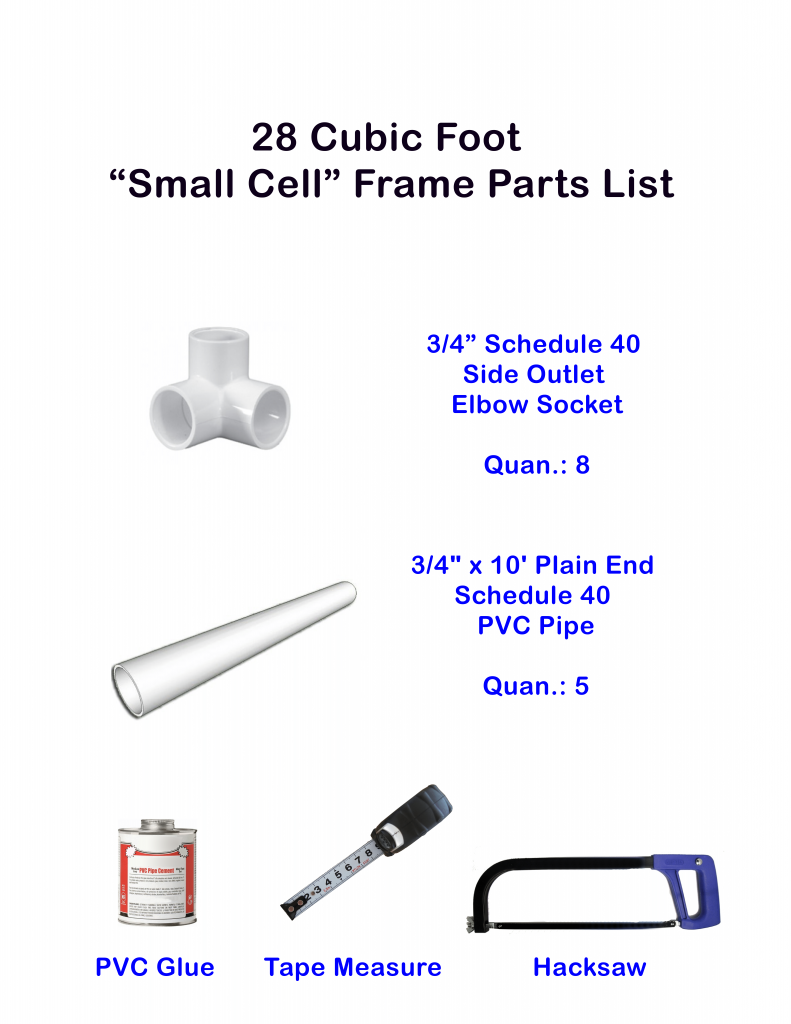 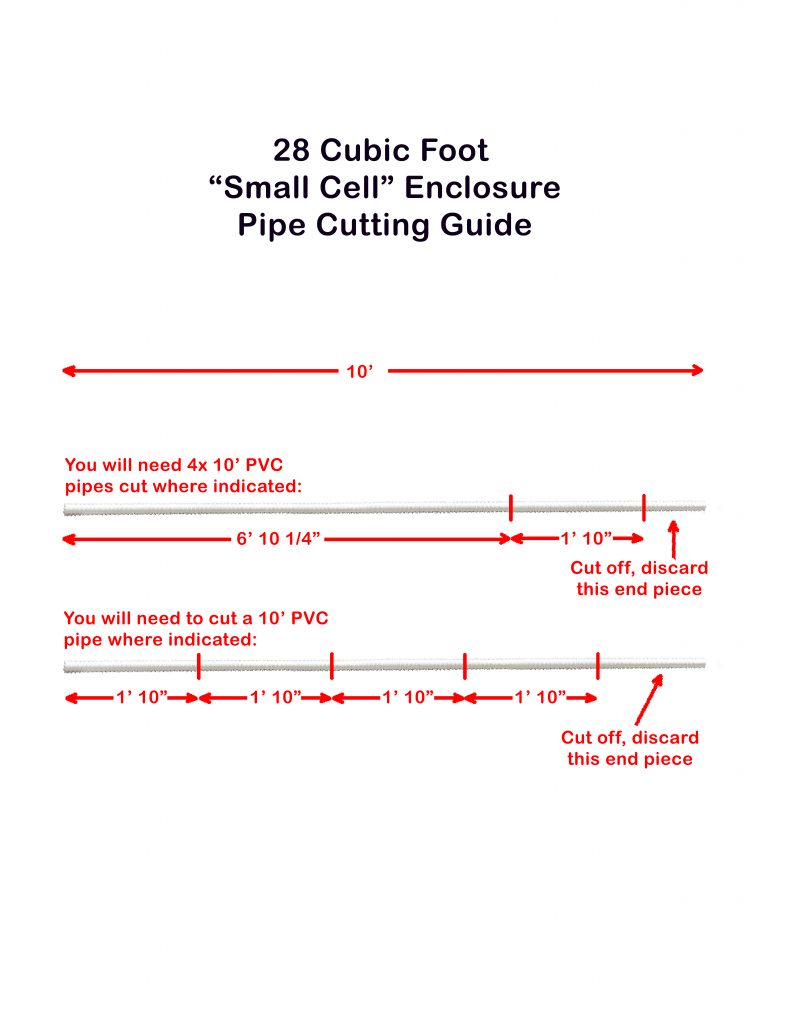 The 1′ 10″ pieces, along with the side elbow outlet connectors, form the top and bottom of the frame. The 6′ 10 1/4″ pieces form the vertical members of the frame. For easy transport, glue the top and bottom frames, but don’t glue the vertical members.  This way you can put this frame together in from of a City Council in less than 30 seconds.  Very visual!

Gosh, this is great fun for kids of any age!  Unless, of course, you’re a wireless industry kid, in which case this will be far less than fun for you.

If you haven’t used PVC glue before, you should get help from an experienced adult who know he basics about ventilation and safety.  Don’t try using PVC glue if you’re not experienced or don’t have access to experienced help.

PS: No alternative facts were used, much less harmed, in this posting. 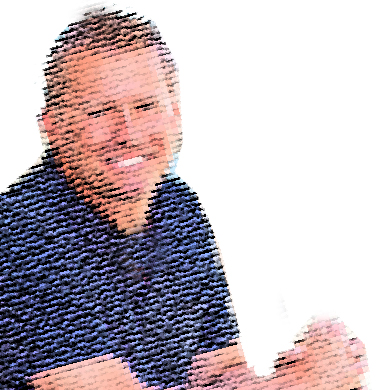 “It comes down to how … stupid the elected officials … are. There are many stupid cities around the country – really dumb. They’re greedy…They don’t give a s*** about their constituents.”

That was the opening quote in the NATOA (et al) Reply Comments in the Mobilitie Petition for Declaratory Ruling.  Read the entire reply comments here:   NATOA REPLY COMMENTS.

What strikes me as “really dumb” is how Mobilitie’s patron, Sprint has not figured out how (or doesn’t care) to control the mouth that spews such ignorance with such arrogance.

A joke going around the industry is that the DAS companies created Mobilitie so that they’d look good in comparison.  Hummm. 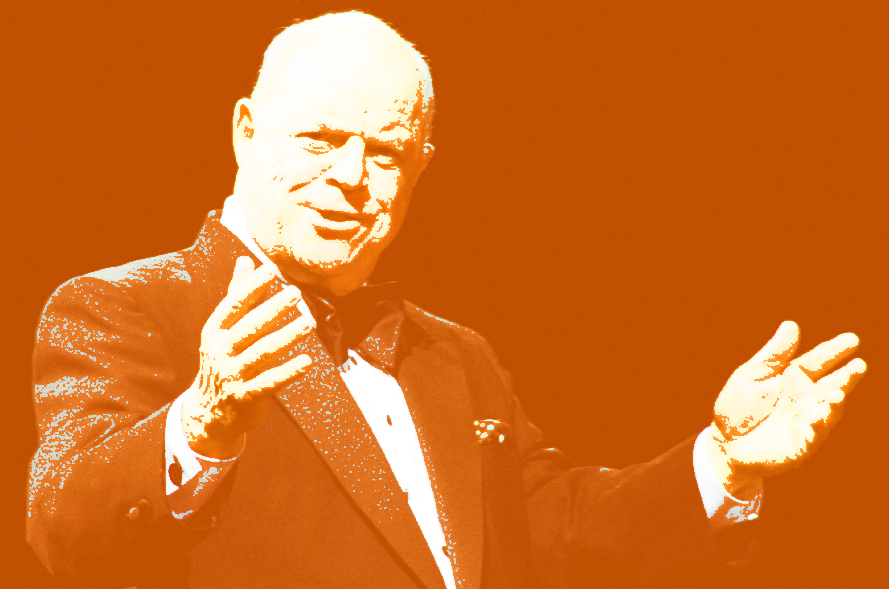 The late Don Rickles was simply a big fraud.  I know this from first-hand experience having personally met him at his Malibu home in 1979.

At that time, I was the System Engineer for Warner Cable in Malibu. I was in charge of all technical operations for the cable system serving Malibu. 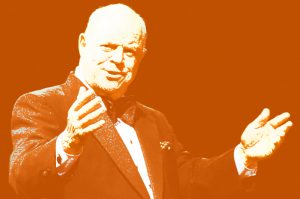 I clearly remember sitting in my office one day working on the detritus that was the paperwork that accompanied my management position, only to be interrupted by the loud buzzing of the telephone intercom.

Answering the intercom, I was greeted with the clearly jarred voice of Carolyn Loving, who was Warner Cable’s Office Manager at that time.  She said, “Jonathan… Don Rickles is on the phone, and he’s pisssssssed.”  Sucking in a deep breath, I punched the outside line button and said, “Mr. Rickles, I’m Jonathan Kramer, the system engineer. How may I help you?”

The reply came instantaneously and forcefully. “KRAMER!,” Mr. Rickles nearly shouted, “If you ever send Chas to my home again I’ll shove a ladder up his nose.”

Nonplussed, I glanced down at the daily jobs schedule at the edge of my desk.  I saw that my installer by that name was scheduled to perform some relatively easy work at a home on Malibu Road, which I deduced to be Mr. Rickles’ residence.

Mr. Rickles told me that my installer had acted very rudely towards him in his home.  Frankly, this didn’t surprise me because Chas had some personal issues going on at the time, but I didn’t think he would carry them over into his contacts with our customers.

My General Manager at Warner Cable in Malibu, Mr. J. Phil Franklin (a truly blessed memory), spent a lot of time guiding every person on staff on what he always felt was the most important thing for any service organization, immediately solving problems.  What differentiated Phil from most managers is that he empowered every one of the employees to do exactly that.

Phil’s training kicked in, and I instantly replied to Mr. Rickles’ rather forceful statement with, “Mr. Rickles, may I please come to your home immediately and solve the problem.”  “Okay.”  <Click>

The next thing I did was to call Chas on the radio and pull him off the job.

Walking in through the front gate on the left side of Mr. Rickles’ driveway, Roberto and I walked down a short set of stairs, then along the stone pathway which curved to the right in front of the front door.

Holding my breath, I rang the doorbell.

The front door opened.  Standing before me was Mr. Rickles in a suit, white shirt, and tie.  With nary a wrinkle to be seen nor lint to be spotted, he looked to me to be the most successful man in the world.

I introduced myself, and Roberto, and Mr. Rickles invited us into his home. Walking in, he said in a warm and quiet voice, “Please allow me to introduce the two of you to the other guests in my home.”  In fact that’s exactly what he did.

Only after all the introductions were made to the other guests in his home, which pointedly included his house staff, would Mr. Rickles and I spent a few minutes talking about Chas’s rudeness, and the work to be performed.   I offered my apologies for my staff member’s rudeness, and Roberto and I (but mainly Roberto) performed the work that Chas should have done in a very short period of time.

With the work done, we said our goodbyes to Mr. Rickles. He thanked us in a very warm and friendly manner as we were leaving, walking with us up the walk to the front gate.

Later, back at the cable office, I shared the story of how Mr. Rickles treated us as true guests in his home.  Several other members of staff who had been to his home over the years said that this wasn’t out of character or place. When you’re in Don Rickles’ home, regardless of your station or reason for the visit, you were a welcomed guest and treated as such.

To me, the true Don Rickles is the gentle and respectful man I met that day at his home so very long ago.  I consider it one of the great privileges of my life to have met that very real man.

A few times over the years I thought about writing to Mr. Rickles through his agent to share the sentiments I’ve penned above. While I regret never having followed through, and now never to have that opportunity, I hope my words serve as a small contribution to the memory of that public fraud and a perfect gentleman.

Most people want to start using toll free numbers end up simply calling their local phone company to establish the service.  This is almost always a huge and costly mistake. There are many, many phone companies that can register, switch and service toll free numbers since the call ends up ringing on one of your existing phone lines.

For many years we’ve used TollFreeNumbers.com to secure toll free numbers for our firm and our clients.  Run by Bill Quimby and supported by his assistants, Rita and Hope, TFN has consistently been the most honest and reliable registrar for toll free numbers I’ve ever used.  They’re also about the easiest to use, too. Highly recommended.

Before you decide to make a major investment in your marketing by adding a TNF, read about good and bad practices at TollFreeNumbers.com (or give me a call…ahem…toll free on 855-CellSite.)