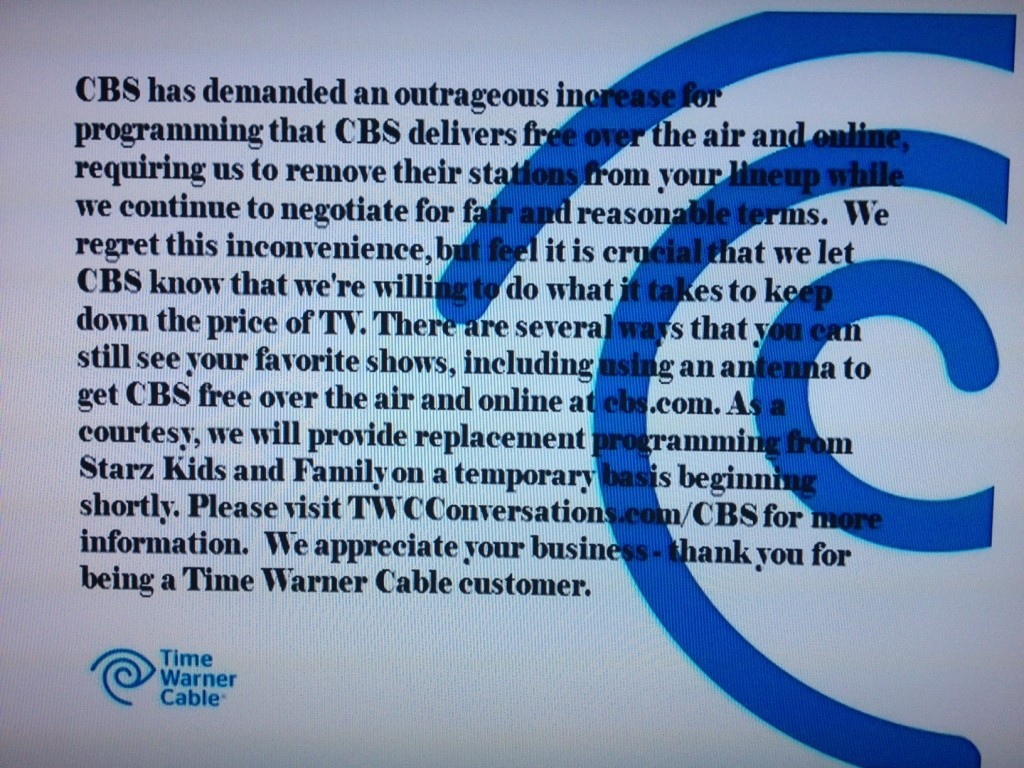 This post is off topic, but as a current Time Warner Cable subscriber in Santa Monica, California; a former Warner Cable manager; and long term cable industry member, I want to speak up.  Soap box, here I come…

Time Warner Cable and CBS are engaged in a game of chicken, with the TWC subscribers in New York, Los Angeles, and Dallas being held hostage until one side exclaims, “Give!”

Time Warner says that CBS wants to raise the retransmission fees by 600%, which is disputed by CBS.

Time Warner suggests that because the CBS content is provided free over the air and online, that Time Warner should not pay ‘so much’ for it.  This, of course, ignores the fact that Time Warner Cable, like virtually all cable companies, makes its subscribers pay for bundled services that far exceed the cost of those services.  It also ignores the fact that the cable industry historically raises its rates for services and equipment far faster than inflation.

CBS’s role in this stupidity is not yet fully known.  I challenge CBS to release its demands and current retransmission fees so that Time Warner Cable subscribers can see who is ripping them off: CBS or Time Warner (or both).  According to TechCrunch, CBS has blocked major market customers from viewing CBS programming on line, including in the markets where Time Warner has taken CBS content off of their systems.

This blackout, now 24 hours in duration, is bad for both companies; bad for both industries; and especially bad for TWC subscribers who are being held as captives by both sides.

This would be a good issue for the FCC to take up.

Now stepping down from my soap box.