Bell Labs has unveiled its lightRadio cell site in a cube system.  It’s received a lot of press from around the world over the past few weeks about it being ‘THE NEXT BIG THINK TO KILL OFF TRADITIONAL CELL SITES.’

Digging a bit deeper into the apparent technology underpinning the system produces some interesting things to ponder.   To set the stage for what I think this lightRadio thing is all about, and how it fits into the grand scheme, first watch the video below of Tod Sizer, the head of the wireless group at Bell Labs, as he talks about developing the lightRadio antenna module. Then look at the chart below the video. When you’ve done that, then I’ll ‘resume’ this conversation. 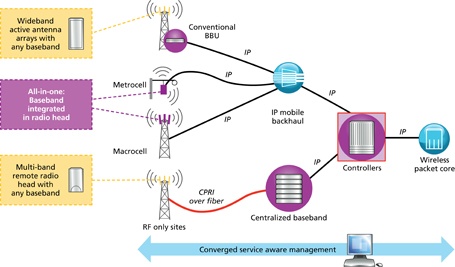 So what’s Mr. Sizer’s video tell us, and what does the chart mean?

Let’s start with Mr. Sizer’s video…  He talks about how the cubes can be stacked to provide directional signal control, similar to a macrocell site.  What’s not too clear is that each cube requires a backhaul connection using Internet Protocol (IP) back to…somewhere.  See the chart just above.

The deployment scheme is not too clear, but it sure looks like it has elements of DAS within it, or at least it seems closer to a DAS than it is to a self-contained macrocell or even a microcell.

Given NextG’s history of suing where they believe someone is infringing on any shred of their DAS patents for network technology and deployment, I’ll just wait to see if they also think along the same lines I do regarding the possibility that the cube is really a micro DAS implementation.

This should be interesting, but it doesn’t appear to be the game-changer that the manufacturer would have us believe.

With apologies to Mr. Clemens, ‘Reports of macrocells’ deaths are greatly exaggerated.’