Last night I watched a tower siting appeal hearing before the City Council of Albany, California.  During the hearing, a resident came up to the speakers podium. As part of his public comment, the resident attempted to make a comparison between cell site emissions and the emissions from a microwave oven.  To hammer home his point, he brought in and set up a special microwave oven  in the front row of the Council Chamber.

Trying to make a point attempting to compare cell tower emissions to those from a microwave oven, the resident told the City Council that he modified the microwave oven to bypass all of the safety mechanisms.  All microwave ovens come with at least two safety interlocks that immediately shut down the microwave oven if the door is opened during the cooking cycle.

The resident then proceeded to make his point by operating the microwave oven by cooking what he identified as a grilled cheese sandwich–with the microwave door open and the microwave cavity pointed at the City Council and staff. 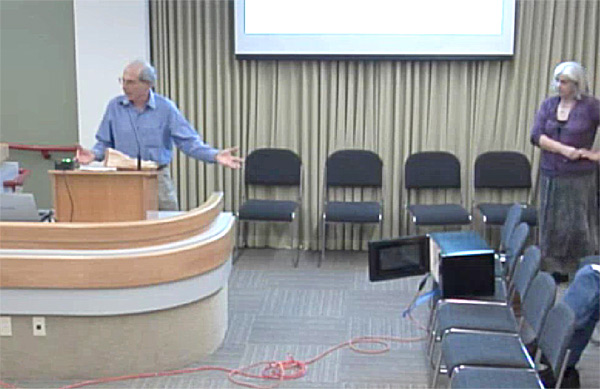 In my opinion, the resident’s ‘demonstration’ was a disingenuous  and dangerous stunt.  I have never seen such a stunt in 29 years of public service.

It is meaningless to attempt to compare the emissions from a 900 watt microwave oven emitting into a focused cavity resting on a chair in a meeting hall with a cell site professionally engineered to comply with federal standards (this is the disingenuous part).

While the microwave emissions may not (or may, for that matter) have exceeded the FCC’s/FDA’s standard beyond a measurable distance, no inquiry was made by the resident as to whether anyone nearby was using a pacemaker (this is the dangerous part).

Moreover, the use of an electrical extension cord to power an appliance (and to do so in a public meeting area) violates various electrical and other safety codes.

Had I been at the meeting in person, I would have stepped in to prevent or stop the stunt.

To pound the key points home:

Look, I’m all for the public expressing views at a public hearing.  I am, in fact, a dyed-in-the-wool supporter of public participation in the government process.

What I do not support, however, are expressions of public participation in the government process in ways that are dangerous and/or illegal.

That’s my opinion on this resident’s stunt.  What’s yours?

2 thoughts on “A Disingenuous and Dangerous Stunt”