Is Leap Wireless a tasty bug?

According for FierceBroadbandWireless, which has a good eye for such things, T-Metro (really, T-Mobile and its recent meal, MetroPCS) might be getting hungry again.  This time it may be looking to eat a bug, namely a Cricket (Wireless), which is the trade name for Leap Wireless.

Oddly, I’ve been saying about the same thing about T-Mobile and MetroPCS for a while, now.

Of course, your parent(s) taught you not to eat off the floor, so it’s possible Dish might make a running Leap to eat the same bug.

For T-Mobile, this meal would squarely in the middle of its favored food groups.

Leap’s PCS system–and as importantly its customers’ handsets–are generally compatible with T-Metro’s network.  Better yet, there very little overlap between the MetroPCS and Cricket networks. 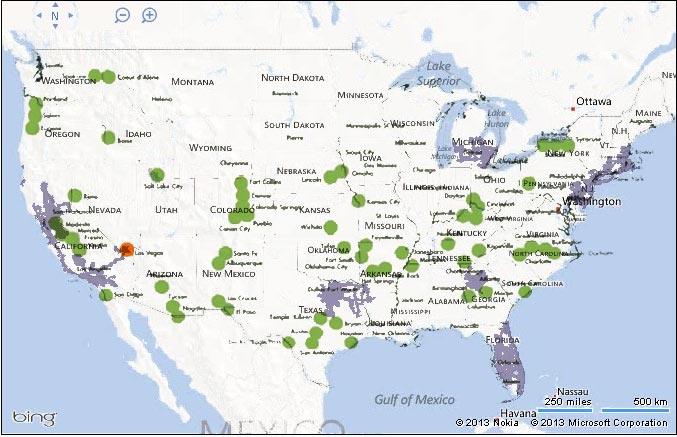 How do I know about the minimal overlap?

Using home coverage maps available on the web as a yardstick, I imported Cricket’s and MetroPCS’s maps into Photoshop and overlaid then one atop the other.

Using the Photoshop Multiply tool, it was easy to see that the only basic overlap between the two networks is in central California with much lesser overlaps in Las Vegas, small parts of Georgia, and even smaller parts of Texas.

Who says everything is bigger in Texas?  Oops.  Sorry…

In the map, purple is MetroPCS’s home coverage; green and orange belong to Cricket; the dark green shows the overlap of the two networks.

Now you can see why Cricket’s frequencies (remember, this is all about frequencies for 4G+ uses, not about pops) complement MetroPCS’s.  Both complement T-Mobile’s footprint.

I just don’t see it.

Yeah, Dish has a whole boatload of money burning holes in the bottom of their satellite receivers, but why spend the cash on little green dots and orange when the purple’s already dished on to on someone else’s plate (or dish)?

The smarter move would be for Dish to make a run on mama T-Mobile herself, with a pretty good national network already in place, and Deutsche Telekom an apparently willing on-again, off-again seller.

While I don’t rule out Dish, I simply don’t think it makes much sense for them to be a buyer of this bug.

Perhaps Dish will be a spoiler, again.

Time will tell.  Just listen for the gurgling stomachs.