Bill Quirk’s, the California Assembly Member serving the 20th District has had a mysterious bill, AB 57, in the hopper since December 2, 2014.  It appears that AB57 is the newest push by the wireless industry to move towards some level of wireless site deregulate regarding the location and installation of cell towers and cell sites.  AB57 is now back in action, and it has been referred to the California Assembly’s Committee on Utilities and Commerce.

While the teeth of the bill have yet to be disclosed we have just the original ‘sense of the Legislature’ language.  You can reasonably expect those teeth to come out in print just before the Assembly’s Committee on Utilities and Commerce considers action on AB57.

YOU SHOULD BE WATCHING WHAT’S HAPPENING ON AB57, especially if you live in Assembly Member  Quirk’s district (see the inset map). 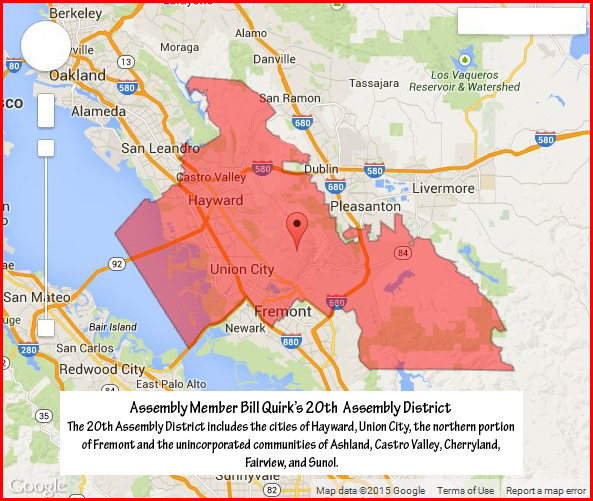 If Assembly Member Quirk puts teeth in his legislation that will protect Californians and our community aesthetics, that would be great. More likely, however, is that AB57 will remove to some degree city and county authority to determine where cell sites should be installed, and the aesthetics of the cell site.  Hopefully Assembly Member Quirk will be promote the interests of local control and his own constituents over the the wireless industry.

I’ve had a chance to talk with wireless industry members off-the-record.  They seem to have an inside peek at AB57 and seem excited about it. That should set off alarm bells with community members who care about community aesthetics.

Finally, for those of you living in Assembly Member Quirk’s district, ask him why he has omitted information about AB57 from his web site.