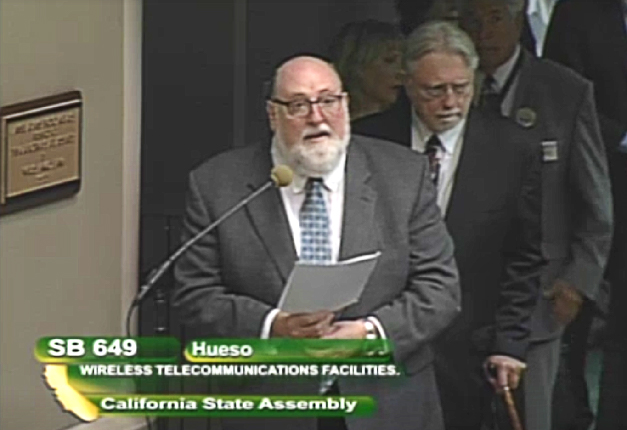 On August 23, I was the only local government representative permitted to speak at the Appropriations Committee hearing of the California Assembly in opposition to SB 649, the statewide wireless deregulation bill.  The Chair allocated all of 2 minutes for opposition comments from local governments, and I was designated by the League of California Cities, CSAC, APA, the rural counties, the urban counties, and the Coalition of Concerned California Communities as the local government speaker for those 2 minutes.

Below are my prepared remarks:

I am Dr. Jonathan L. Kramer, here at the request of the League of California Cities, and a coalition of local government stakeholders including the APA, CSAC, APA, the rural counties, the urban counties, and the Coalition of Concerned California Communities.

Last year I completed my doctorate in law and policy at Northeastern University. My doctoral thesis studied, in part, economic impacts of cell sites in residential communities.

The local government stakeholders remain opposed to SB 649 as revised because –among other reasons–of its tremendous negative statewide economic impacts over the next five or so decades.

A proper bill would require the deployment of a wireless network that would help to close the existing wireless digital divide in California.

SB 649 is devoid of any such requirement, much less a coherent and comprehensive plan to close that gap with 5G. Not even with 4G…or 3G.

It is obvious that wireless communications is a statewide economic driver, and a proper bill would ensure the economic benefits of wireless state wide.

Sb 649 is not that Bill. It ensures nothing of the sort.

There can be no argument that Public Safety is a statewide economic issue.

My firm has inspected hundreds of thousands of broadband and Wireless communications locations in California. In our experience, wireless and broadband providers violate safety codes north of 30% of the time.

As you’ll recall, the Malibu fire was caused by overloading of utility poles by wireless facilities. Certainly, a conflagration like that had an economic impact far exceeding Malibu.

A proper bill would never act to weaken public safety. Yet SB 649 on a statewide basis does exactly that by allowing some “small cells” to be installed by wireless companies and Cable TV operators without even having to obtain local permits and inspections. Not even traffic control permits! Boom, a cell site suddenly appears on a pole near you.

It is simply the most fundamental concept of public management of the right of way to know who and what are in those rights of way, and to make sure that facilities installed in the right of way are inspected to verify initial and ongoing safety code compliance.

They properly crafted and well thought out bill would not–on a state wide basis –shift the economic burden of building a 5G network from the shareholders of the for-profit wireless carriers and shift that burden to the backs of California citizens by grossly sub-market rents and compulsory access to essentially every type of private property.

A proper bill would not incentivize wireless carriers to break their private property leases to go into the public right of way, all to the economic benefit of their shareholders but to the detriment of private wireless site landlords, and the citizens who paid for improvements in the right of way.

The wireless industry has been telling legislators that 5G is necessary for the deployment of an earthquake early warning system.  While that’s a political sounds-good argument, even if a technical misstatement of the industry, a properly crafted bill would require wireless providers to participate and in part fund statewide that earthquake early warning system as a condition of the incredible benefits that attach to deregulation.

A properly crafted bill would not reduce general funding sources that pay for police and fire services by artificially slashing rents to far below the fair market rental value of Government improvements to property paid for by California residents to benefit wireless company shareholders.

We ‘get’ that there can be tremendous value in wider deployment of wireless services to all of the citizens of California in all parts of our Golden State.  That should occur through a properly crafted, thoughtful wireless bill that at least tries to balance the equities.  We believe that there a path to that proper bill.

It’s just that there is no clear and obvious path through SB649 to that proper bill.