Our law firm recently dealt with an interesting issue: an attempted unpaid land grab by a carrier.  This is an issue that wireless site landlords should ALWAYS be on the lookout for when reviewing the plans for a proposed site modification.  This story deals with a proposed standby power generator.

In the matter we just resolved for our landlord client, the wireless carrier wanted to install a new propane gas powered standby power generator at its cell site on our client’s property.

For the most part, that’s a good thing.

The carrier proposed that the 7,500 watt standby power generator; the 120 gallon propane tank; the power transfer switch, etc. all to be placed entirely within the existing leasehold area.

When we reviewed the project plans for the landlord, we recommended the landlord DENY the request.  The landlord was surprised.  All of the proposed modifications were to be entirely within the leasehold area, so on what basis wound he deny the request, he wanted to know.

Well, it turns out that the carrier’s request to modify its site—entirely within its leasehold area, was an attempt to secure a defacto, covert unpaid expansion of the land on the landlord’s property to be controlled by the carrier.

And that’s not a good thing.

What the carrier outright failed to tell the landlord (and only provided a single oblique reference on one panel on a single page of the 11 pages of zoning plans) was that the location of the propane tank triggered a fire safety code ignition clearance zone of 5 feet in all directions around the tank.

To maintain the ignition clearance from all of the existing wireless equipment inside the leasehold, the carrier proposed to place the propane tank against the edge of the leasehold.  That meant that the 5 foot clearance zone around the tank would actually extend outside of the leasehold area, thereby restricting and controlling the landlord’s use of his own property.

Figure 1, below, contains a capture of the relevant portion of the plans as proposed by the carrier: 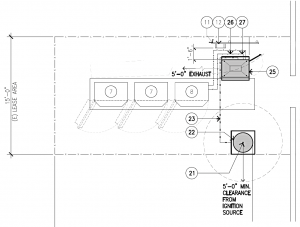 In the next graphic, Figure 2, I’ve animated the plans in Figure 1 to show exactly where the land grab would have occurred had we not detected it:

(Click on the image above to see it in full size and animation.)

Did the carrier, on its own, actually disclose these the relevant facts to the landlord other than via an oblique plan page reference? No.

Did the carrier, on its own, offer any additional rent to the landlord? No.

In the end, did the landlord, once alerted by us the unpleasant reality, agree to permit the defacto unpaid expansion? No.

Having being caught by us, the carrier redesigned the site to comply with the fire safety codes without trying to sneak in an unpaid leasehold expansion.