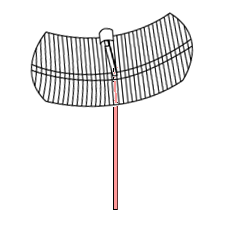 AT&T is filing applications with local governments to modify existing cell sites to add a wire frame parabolic antenna at some of its sites.  The application also shows the addition of signal splitters (or combiners) and multiple power amplifiers.   In the applications that I’ve seen so far, there’s no mention as to the service that is being provided by (or is it to) this new antenna.

What the heck is going on here?

Well, I have a very Sirius answer for you.

AT&T is adding re-transmission services for SiriusXM radio to some of its cell sites.  Are they telling the jurisdictions that re-transmission is for a completely different non-carrier?  Well, so far unless pressed hard, all I’ve seen is a big fat NO to that.

SiriusXM satellites are in orbits that are occasionally blocked for their mobile users. Why? Primarily because of tall building and hills that place physical barriers between the satellite and a car’s satellite receiver.  If the blockage lasts for more than a few seconds, drop-outs will start to occur.  In urban areas, such as here in L.A., rows of tall buildings are a real issue.

How does SiriusXM deal with this?

Historically, SiriusXM has used terrestrial relay stations that receive the satellite signal at high points and they re-transmit the signals via narrower beam width antennas shooting up and down highways with blockages on the south side.

A heck of lot of AT&T cell sites already do the same thing along highways, and into neighborhoods that are otherwise sometimes blocked by tall buildings.

And, on top of that, AT&T has a lot of antennas with spare transmission ports waiting to be used.  That’s what SiriusXM is going to do…use those spare ports, no doubt for a tidy fee.  Whatever the fee, however, it’s 99.999% likely that the collocation charges levied by AT&T will be less than SiriusXM leasing its own re-transmission sites.

Here’s a basic block diagram I’ve pieced together to example how all this works: 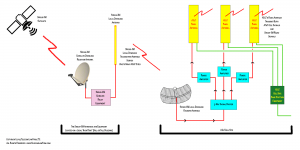 (Block diagram by JLK: Click on the image above to enlarge it.)

AT&T is claiming that these SiriusXM site modifications are subject to the expedited treatment under Section 6409(a).

What I’ve seen so far, at least at camo AT&T sites, is that these SiriusXM add-on installations can bust the camouflage provision that drops a modification out of Section 6409(a) and back into major-mod land.  There are some other problems with these SiriusXM projects as well, but I’ll save those tidbits for our firm’s clients.

And now you know a lot more about this very Sirius AT&T issue.